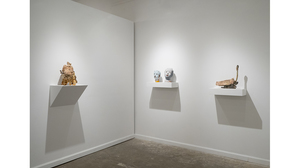 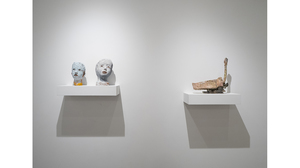 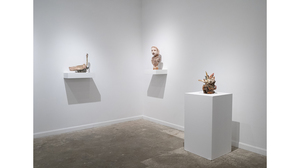 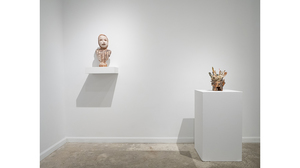 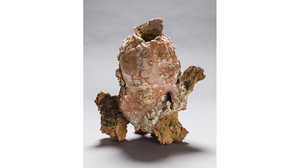 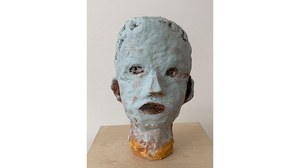 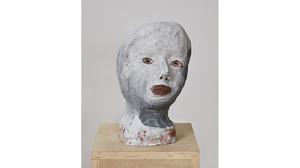 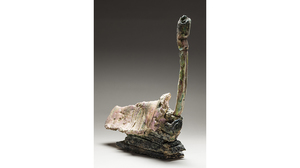 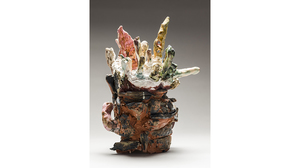 Coarse Fragility is a two-person exhibition presenting the work by ceramic-based artists, Elise Siegel and Judy Hoffman. The show features work examining ideas of vulnerability, imperfection and chance. Working in clay—a material which starts off malleable but ends up rigid—both artists explore ideas of transition and disintegration.

Siegel and Hoffman balance intent with the uncontrolled, carefully guiding chance to craft sculptures that evoke a visceral and emotional response, stopping just short of dictating what that response should be.

Elise Siegel contemplates the object-hood of human representation in her work. Her busts are coarsely defined; their human faces have roughly shaped features with eyes that are sometimes gouged. Her color—in the form of slips, oxides and glazes—is loosely applied in multiple layers with brushes, or dripped in underglazes and slip. This gives the figures a textural effect of having lived a life of their own. There is a vulnerably to the works, one of almost being naked before the viewer. They suggest the most private moments of an inner conversation; moments of blankness, hesitation or disorientation. They are the unguarded self, provocative and exposed.

Judy Hoffman’s hand-built works draw much influence through the process of creation. Her pieces are torn and stabbed, seeming almost crude and vulgar at first. They speak of both disintegration and rebuilding—being pieced together with mismatched, discarded, eroded components. This produces a feeling of discomfort—if only briefly—as they refuse to be self-aware or shy from challenging us with their imperfection. They are liberated from having to mimic any form. Her sculptures are raw, but one quickly realizes that the work has been crafted with a tender regard to reveal the richness and beauty within their chaos.

The works in Coarse Fragility are perhaps atypical to our current cultural climate where objects are designed to be quickly recognizable, where slower ideas are replaced by generic, instantly categorized hashtags; their meanings fixed and rigid. Siegel and Hoffman’s sculptures are powerful expressions of the life that can occupy an object; of the stubborn persistence—and humor—of the creative process and the fragile balance that exists between spontaneity and intent.