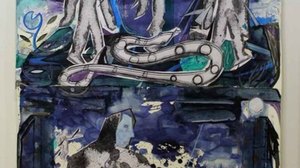 “More is unknown than is known. We know how much dark energy there is because we know how it affects the Universe's expansion. Other than that, it is a complete mystery. But it is an important mystery. It turns out that roughly 68% of the Universe is dark energy. Dark matter makes up about 27%. The rest - everything on Earth, everything ever observed with all of our instruments, all normal matter - adds up to less than 5% of the Universe. Come to think of it, maybe it shouldn't be called "normal" matter at all, since it is such a small fraction of the Universe.”


Dark Map is a show of abstract drawing. Not the orthodox type of late modernist abstraction concerned with formalist purity, but a different kind of emergent abstraction primarily interested in discovery rather than stylistic hegemony. Poetically speaking, it involves going outside of what is known into darkness to uncover something new in art and reality. In all of the work there is a sense of exploring the unknown, a mystery; abstraction as giving form to something unnameable, or not yet named. Dark Map focuses on drawing because of the medium's long connection to charting territories both tangible and intangible; conversely for its immediacy; as jots of visual thought.


The curator states: “I like the less common notion of drawing. Not drawing necessarily as depicting or copying something that exists, but as drawing out something unseen, conjuring”.


Most of the artists in Dark Map have a process of finding the shape of their artwork while making it; they do not know what the piece will look like until it is done. Many of them use chance and randomness as part of their process. Some use a set of self-imposed rules whose consequences are unpredictable. Mystery and not knowing
are a part of the artwork.
###