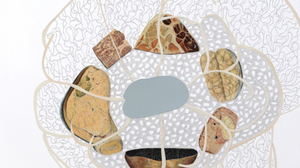 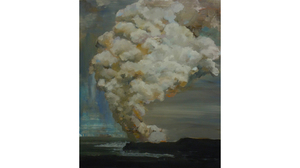 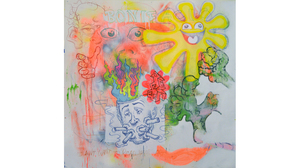 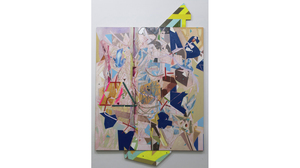 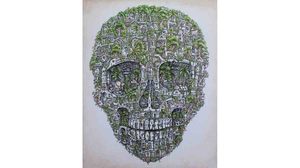 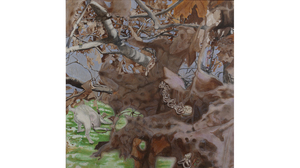 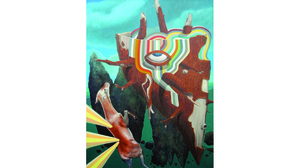 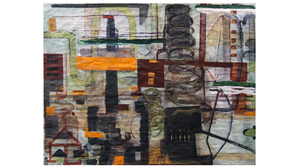 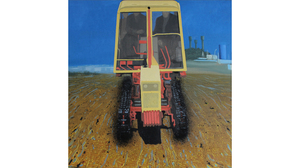 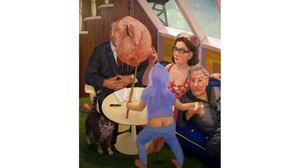 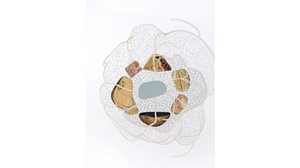 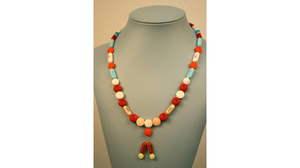 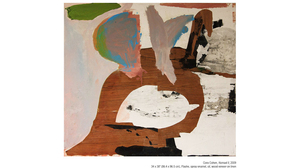 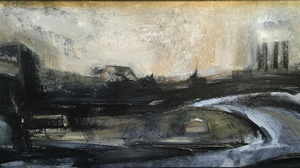 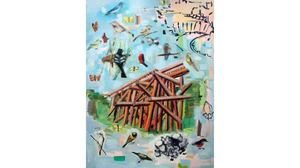 Foreign and domestic terrorism, war, hate crimes, discrimination, social media, partisan politics, corporate corruption, major ‘accidents’, health threats and the stress that follows go a long way in keeping us all out of whack, off balance, imaging and extrapolating. Even as educated, enlightened and forward thinking as we believe we are in today’s world, we still face periodic overload and confusion that comes from a very intense place complicated with misleading information and continual change. This overall uncertainty – our psychological discomfort – can and often does eventually spawn mental and emotional changes. As a result, as we have so sadly come to know from many different vantage points and instances that we rarely are, if ever truly safe as we pass our comfort zone and move out onto the unpredictable precipice of Shaky Ground. For a record of this most contemporary experience we must look at the arts, and in this instance visual artists who are exposed to this over abundance of ‘information’ that inspires any and all types of subject matter.

The narrative of this exhibition begins with Nomad II (2009) by Cora Cohen. We can be overwhelmed by our surroundings; we may question our decision-making; we can feel exposed, vulnerable. In the mixed media work on linen, Nomad II, we sense instinctively, an abstracted and multi-dimensional individual at the beginning of a new journey and faced with a whole host of options that may lead to higher ground, or to a path of mayhem and misery.

With Dieter Kuhn’s mixed media work on paper Untitled (2013), our thoughts shift constantly, interrupted by daily reminders of the foils and follies of mankind as represented by ominous shapes, disjointed patterns and wicked color. We feel trapped within a maze mad with machinery and bursting at the seams. It’s hitting us all at once so hard we cannot totally comprehend our environs, as we stand lost and looking for a way out, or is it in?

In another mixed media works on paper, Ancestor Worship (2014) by Bill Gusky, we find the representation of a perplexing social situation where the judgments of others become so overwhelming that we can barely move. We become anxious, defensive, even crazed, as we are no longer safe in what once was any number of secure circumstances such as the work place, school or any previously benign social setting.

Then there are other times when it’s our natural surroundings that give us pause. Catya Plate knows this all too well, as she creates narratives in paint and blood that defy reason, or do they? This is the concern, as we are puzzled by the combination of elements depicted and fearful of the otherwise insane plausibility when we should be communing with nature in an otherwise peaceful situation.

When we begin to confuse our dreams with reality - we can think irrationally - do crazy things. Dennis Kardon’s impressively painted and boldly staged The Constitution (2005) is somewhere between theater and nightmare where the players are all in and the plot divides and conquers taking all its participants with it. In the end, there is hell to pay for his or her sins and shortcomings – that is, if anyone really cares.

In Tractor (2008), Gennadi Barbush shows us how the commonplace can become sinister, horizons imposing, and a sense of the ‘norm’ more ominous by placing a tractor filled with shadowy ‘businessmen’ in a baron field. It’s about hidden powerful forces; the strings that bind and control us; the secret insidious experimentation and the fact we are the ultimate guinea pigs in the most definitive game of wealth and power.

Then the anxiety really starts to set in and we become unduly paranoid and defensive. In my painting, I try to define that ‘telling place’ where fear and suspicion takes hold and the dance between survival and sacrifice begins as evidenced by a peculiar combination of two mysterious characters in Nature Calls (2015).

Kirsten Stolle’s explicitly illustrative mixed media Cross Section RBGH (2012) is far more subtle, but equally mentally invasive as the aforementioned Coast, as Stolle goes on to address the very real, day to day threats in our water, food and air with very familiar looking objects. Each day, more and more of our most basic need, food, is genetically modified – changes that may, from the outside, appear to be solving one problem can have equally dangerous and lasting effects on our health and wellbeing days, months even decades down the road.The ominous painted plume in Coast (2013) by Anna Ortiz reminds us how a disaster can mark time and define an age. There is tremendous discernable weight in many of her tableaus, especially this one, as the density of a weighty atmosphere heightens it. A factor that, when studied, breaks down and clogs our minds as it seeps through our unfortunately weakened and porous shields of hope and faith.

Roman Turovsky painting Stadt 24 (Pulaski Skyway) (2011) pushes us back to a distant vantage point, leaving us to see through the rather mind-altering murkiness that engulfs our cities. Sweeping steely shapes, smoking stacks and sinister skyline sends a pall of light across the land not unlike the menacing glow once captured by Albert Pinkham Ryder over a century ago.

If you arrive at a certain level of pain, it can be most useful to ease the hurt with a very fashionable opioid-laced accessory as suggested by Arcady Kotler’s Painless Necklace (2006). Displayed across a bust-mannequin’s neckline like high society jewels, Kotler presents potent painkillers as a way out – chemical comfort for as long as the money, medical scripts or supplies lasts.

Our lives can unravel when we are awake or asleep, or somewhere in between. Trestle, Rock, Dam (2011) by Mary Ann Strandell reveals a somewhat quiet collision of thoughts and memories set against picture-book perfect fields of heavenly blues and peaceful greens. The smartly fractured picture plane, which contains random points of reference and opposing techniques, keeps us mesmerized and in the moment, despite how it is oddly joined dimensionally.

VSS (2014) by Bryon Finn represents quite abstractly, with numerous materials and techniques, how a mental, spiritual or emotional crash can divide and conquer our minds and spirits. One could look at this work as a representation of how, when the structural integrity of our lives, the glue that keeps us together, breaks down, a new erratic energy can take over leaving us with wildly converging thoughts and visions that can skew our sense of the here and now.

Alexis Duque’s Calavera II (2015), an intricately described and thoroughly complex narrative painting shows how sometimes, when we fully embrace the most definite fact of life itself, the inevitability of death, we can really begin to live. In the end, we must yield to the unavoidable and discover our worst fears are what gives us the strength, the impetus, the wherewithal to walk upon Shaky Ground.