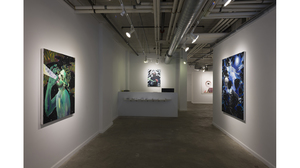 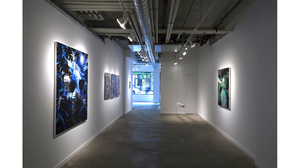 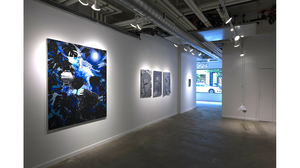 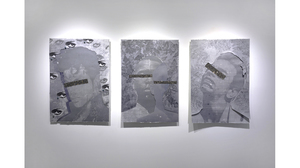 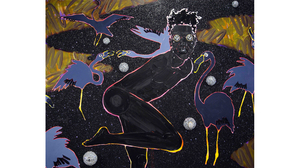 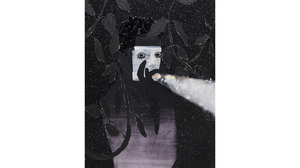 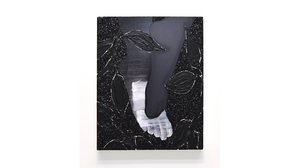 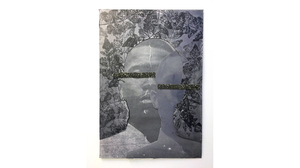 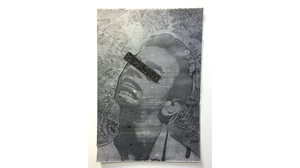 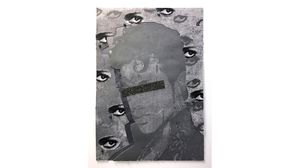 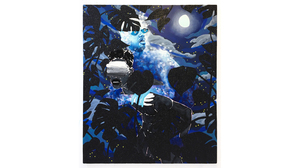 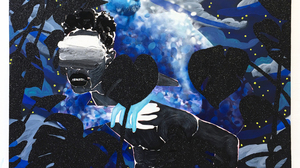 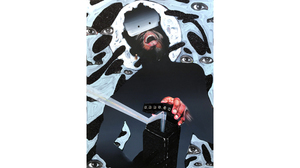 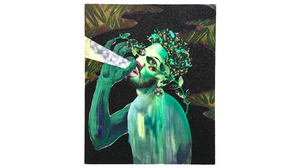 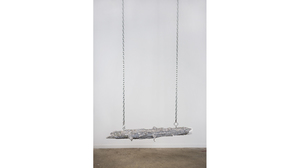 Lesley Heller Workspace is pleased to present the first New York solo exhibition of Pittsburgh-based artist, Devan Shimoyama. Primarily using self-portraiture and narratives reminiscent of classical mythology and allegory, Shimoyama proposes a new, queer, black, male creation myth. Shimoyama seeks to re-imagine this male body as something both desirous and desirable. His paintings explore the relationship between celebration and silence in queer culture and sexuality, and set the stage for an ethereal exploration to unfold.

Possessing an otherworldly yet familiar quality, Shimoyama’s poses and imagery have a reminiscence of the canons of old masters such as Caravaggio and Goya, though they are undeniably present, with a 21st century sensibility and expression. Using the tactility of thickly poured and splattered paint, luminous sprayed stencils, effervescent black glitter, rhinestones, and sequins, Shimoyama creates silhouettes of figures that exist as wholly magical, yet universally human.

Armed with a dazzle of materials, color and imagery, there is a dream-like quality to the works echoed further by symbolic inclusions of faceless eyes, rainbow breath and twilight backdrops. The figures are both present within the paintings, yet veiled, distorted or undefined, telling a narrative of masculine yearning, self-exploration and sexual desire. Shimoyama’ portraits serve as a portal for the viewer to enter and undergo a symbiotic relationship with

Devan Shimoyama (b. 1989, Philadelphia, PA) received his BFA from The Pennsylvania State University in Drawing /Painting (2011) and his MFA from Yale University School of Art in Painting/Printmaking (2014). Shimoyama has exhibited throughout the United States, including at the Northern Illinois University Art Museum, in Dekalb, IL; Samuel Freeman Gallery in Los Angeles, CA; Alter Space, San Francisco, CA; Emmanuel Gallery, Denver, CO;  The Active Space, Brooklyn, NY; and internationally in Realities in Contemporary Video Art at the Fondation des Etats Unis, in Paris, France. Shimoyama has been featured in publications such as New American Paintings (Volume 105 & 116), Pinwheel, and Saatchis Art’s ‘Best of 2014’. Devan Shimoyama is currently full time faculty at the Carnegie Mellon University, Pittsburgh, PA" and lives and works in Pittsburgh, PA.