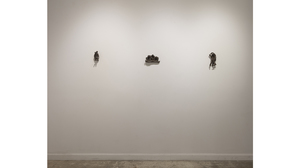 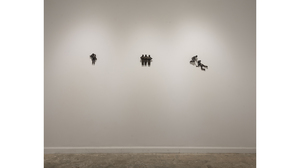 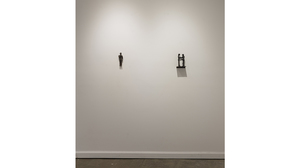 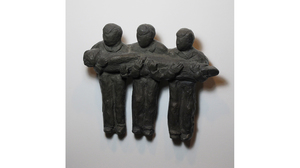 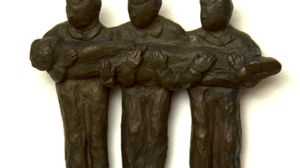 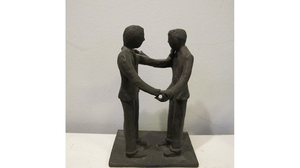 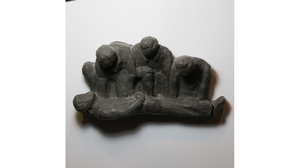 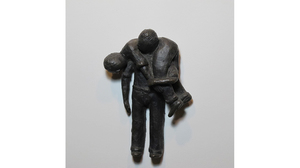 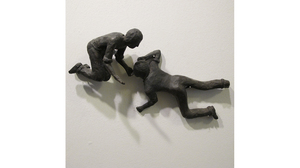 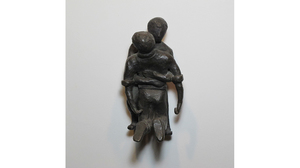 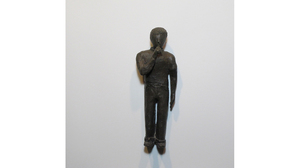 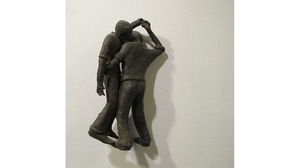 Lesley Heller is pleased to present an exhibition of small-scale figurative bronze sculptures by Carol Saft. An artist, filmmaker, and activist, Saft is widely known for her documentary short films about New York artists and her experimental video series, My Brother Todd.  As a sculptor, she infuses objects with vulnerability and a sense of agitation.

Fallen Men is an exhibition of Saft’s sculpture series of human figures interacting with each other in simple open-ended gestures of caring and action. These poses of intimacy are direct and humble in postures that express a universal message.  There is a didactic simplicity in each figures’ gesture. Some of the pieces clearly read as “caring” poses, such as in The Fireman’s Carry. Other pieces question social norms. For example, Shushing Man may be protecting our secrets, or enforcing silence about them.

Each figure’s gesture conveys an open-ended message for the viewer to interpret and bring into their lives.

Saft believes that her process of carving wax with a penknife and casting the wax in a foundry yields the simple and direct message her figures convey. “It is the humanity of my figure’s gestures that I hope will endure for as long as the bronze of which they are made survives.”

Carol Saft is a filmmaker and sculptor who is attracted to edgy people with a story to tell. She was born in Newark, New Jersey, attended The Pratt Institute New Forms program, and received a full fellowship to complete her MFA at S.U.N.Y. Purchase. Her videos and sculptures have been shown nationally and internationally at film festivals, museums, and galleries. Her screenings include, The Smithsonian Institute, Aurora Picture Show, the United Nations World Conference, the Islip Art Museum, The Guild Hall Museum, The Parrish Art Museum, Pierogi Gallery, Diverse Works, and CableVision’s 28sec project. She has had grants from the New York State Council on the Arts, the International Film and Television Workshop, CableVision Systems, a New York Foundation for the Arts exhibition grant, and the New York Community Trust. Saft has had residencies at The Henry Street Settlement’s Abrons Art Center, The Vermont Studio Center, and The Cooper Union Summer Residency, and most recently, the Merritt Island invitational residency. Her video work has been reviewed in local and national publications including The New Yorker Magazine, New York Newsday, the Berkeley Press, Chelsea now, the Southampton Press, the East Hampton Star.