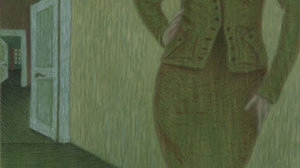 New York, NY– March 27, 2010– In psychoanalytic theory, the unconscious is the division of the mind containing elements of psychic makeup, such as memories or repressed desires, that are not subject to conscious perception or control but that often affect conscious thoughts and behavior. Cognition is the mental process of knowing, including awareness, perception, reasoning, and judgment. The five artists in Cognitive Unconscious derive their imagery from collections of thoughts, dreams, stories or memories.

Mary Carlson’s series of stoneware St. Margarets taken from historical paintings or illuminated manuscripts put a contemporary twist to the Medieval story, largely believed to be fictional, of St. Margaret of Antioch escaping from the belly of a dragon.

Seth Michael Forman creates, in oil on canvas, semi-autobiographical fictions painted realistically without evidence of brushstrokes and derived from dreams, daydreams and chance encounters of his everyday life. He writes, “I hope to develop a personal mythology and an imaginary world.”

In an intentionally naive style Nick Ghiz paints in acrylic on wood panel subjective fictional narrative setups he culls and cobbles together from his dreams and his obsessive reading of fiction novels. Small in scale his work recalls small icon paintings or portable devotional paintings from the 15th Century.

On bent or folded paper Charlotte Schulz meticulously creates her drawings by the careful blending of charcoal and delicate erasure. As each drawing develops vignettes of diverse images and spaces are interwoven with each other.  Her imagery begins with words she has collected from books, essays, and news events of the day. She says, “My narratives gradually evolve as I work, incorporating and transforming significant private memories and larger world events.”

Charles Yuen’s colorful, busy compositions in oil on canvas or paper are at first whimsical and light-hearted. On closer inspection, however, a psychological unease reveals itself in the actions of his fictional characters. Floating in uncertain space these figures, usually men, are engaged in something nefarious, or is it? The viewer is never quite sure and it is this uncertainty that dominates the mood of his work.

Cognitive Unconsciousseeks to explore the space out of which fictional narrative comes. Where does this urge to explain the unexplainable come from and why has it been and still remains a fertile source for artistic expression? Each artist in this exhibition manipulates fictional narratives in decidedly different ways for different reasons, but shares a deep interest in story telling as a way to explain their experience of the world around them.

Artist/Curator Robert Walden is the Gallery Assistant at the Lesley Heller Workspace and is co-founder of Robert Henry Vintage and RHV Fine Art in Brooklyn, NY. He maintains his studio in Red Hook, Brooklyn.